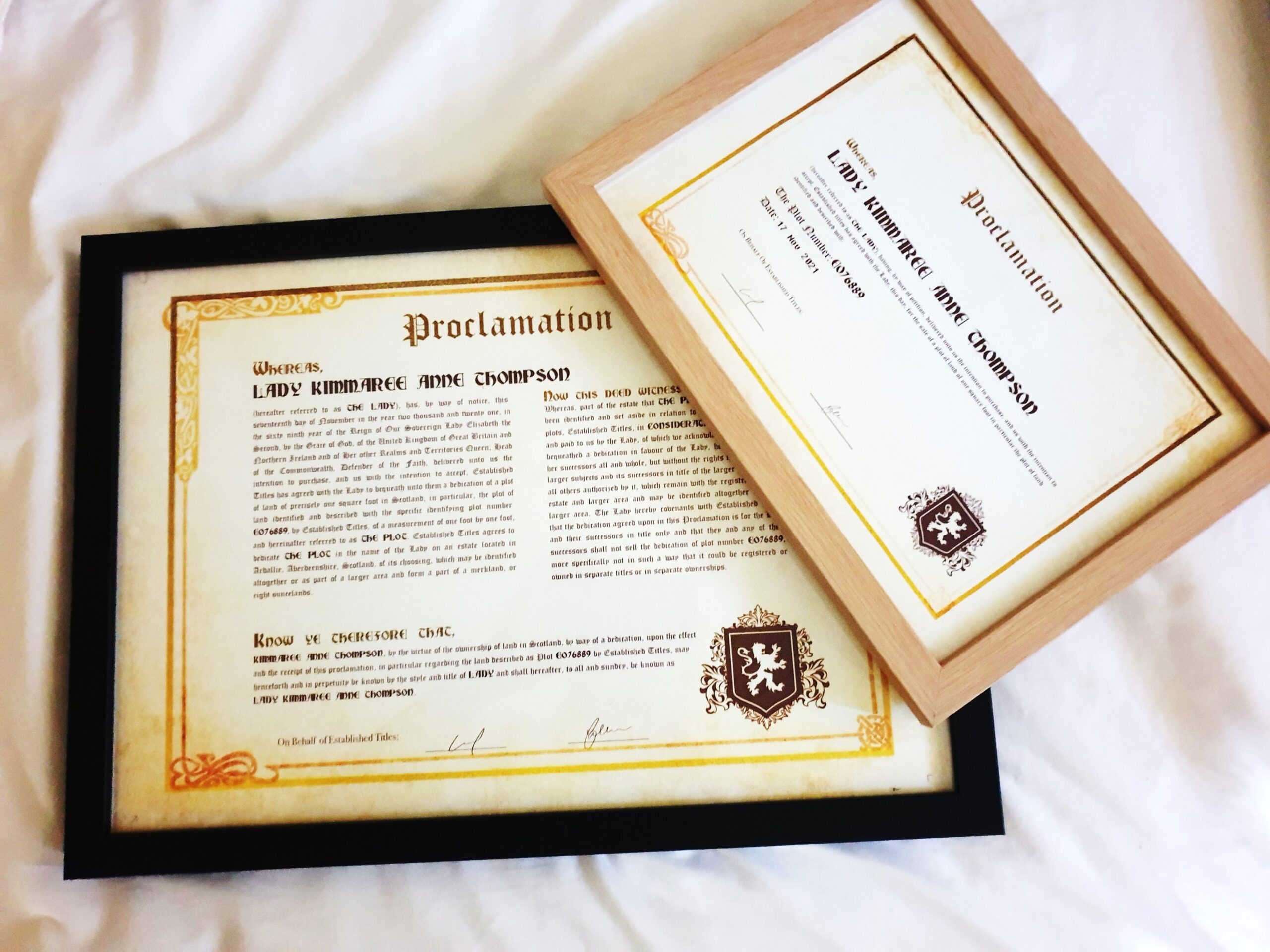 The Title was proclaimed when Kimmaree was gifted a small plot of land in Scotland.   The Title Lady Kimmaree Thompson remains legally used for her lifetime but is not transferred down the generations.  The title is linked to the land, not a hereditary title.

The land, was a Christmas gift; alas, no castle, no serfs, no horse stables came with the land and Title. The land is being used to help to create nature reserves in Scotland, a beautiful place to visit but no castle to holiday at.

As an Aussie, the title of Lady  has resulted in much family and friends ribbing and jokes at Kimmaree’s expense.  Especially as Kimmaree has a long-term commitment to equality, social justice and being an ardent Australian Republican who strongly advocates for an Australian Head of State, rather than the current Governor General as a representative of the English Queen/King.

A 5th generation Australian, from Scottish and Irish ancestors, Lady Kimmaree Thompson believes it is good to have a little fun with the quirks of Scottish Law, supporting nature reserves and hopefully securing the occasional seat upgrade! The earliest Thompson Coat of Arms is reported as granted in 1559, there is some confusion in relation to where it was first granted Yorkshire or Cumberland. Cumberland is part of Scotland, Yorkshire part of England.  The records show the Thompson family had held a seat in the region dating from as far back as the 12th century.

The Thompson coats of arms has had a few versions from it’s inception, there have been various colors, styles and symbols used in coats of arms, including twin eagles; the lion (English King); a stag and cross; three ravens; three roosters in counterpoint to three ravens and many more.  The most consistent part of the design has been the three ravens and the castle battlements.

The Thompson coat of arms appears to include the thistle when it is for the Scottish side and without a thistle for the English side.

The reason that the ravens and castle battlements have been so consistent could be because the Thompson Family had generally been in the role of defending the boarders, in the role of protection.  According to the heredity guidelines the generally accepted meaning of the core elements included in the Thompson Coat of Arms elements are:

This motto is a Delphic maxims and was the first of three maxims inscribed in the pronaos of the Temple of Apollo at Delphi, according to the Greek writer Pausanias. The two maxims that followed “know thyself” were “nothing to excess” and “certainty brings insanity”. so says Wikipedia

“I am going to keep having fun every day I have left, because there is no other way of life. You just have to decide whether you are a Tigger or an Eeyore.” – Randy Pausch

After an ongoing immune system challenge, Kimmaree studied the 7-Level Reiki process, inially to support her own healing process.  Kimmaree completed all 7-Levels of the training and is certified a Reiki practictioner.

There are many different types of reiki (you can read about some of them HERE), in Australia we tend to have 3-Level System and the 7-Level System Practictioners.  The 7-Level Reiki system was started by Dr. Mikao Usui.

Reiki energy flows through your hands and can be directed to yourself and others to support health and wellbeing and alignment with the natural flow of energy.  The purpose of Reiki is to promote good health by balancing personal energy fields.  Reiki energy can be transmitted to others without the practictioner touching the person receiving the reiki energy flow.  Infact, there are many testimonials from people who receive distant reiki energy; distant reiki can be sent to a person who is on the other side of the world.

To learn more about Reiki for personal wellbeing, you may like to start with this article on HEALTHLINE

Kimmaree has continued to use reiki personally, she does not work with clients as a reiki practictioner.

Kimmaree Thompson is a is a positive change and digital business consultant who specialises in personal empowerment and cultural change using Positive Psychology principles and practices.